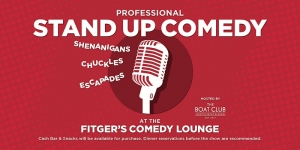 Give him a mic and enjoy your night. All bets are off with Brady’s take on all things from dating at 31 to being the crazy Uncle. He tours the Midwest hitting stages in Duluth, Madison, Stevens Point, Minneapolis and DePere, including the ACME Comedy Club in Minneapolis and the Skyline Comedy Cafe in Appleton WI. He is also one of the organizers for the annual Chuckles for Charity show to benefit charities supporting children battling childhood cancer. Since stumbling on stage 3 years ago he has worked with some of the greatest comedians touring today including Doug Stanhope, Bob Zany, Jamie Utley, Pauly Shore, Geoff LaFleur, Jeremy Danley, Steve Simeone, and Frank Roche.

Nate started performing comedy in 2009 to spite a girl who wouldn’t return his calls. The following year, he finished runner-up in the “Funniest Person in the Twin Cities” contest. In 2012 he ventured west and was a semifinalist in the Seattle International Comedy Competition. In 2013 Nate performed at Laughfest in their “Best of the Midwest” contest finishing runner-up, and he was chosen to open for Mark Maron, Whitney Cummings, and The Sklar Brothers at various shows in Minneapolis. In the spring of 2014 he was tabbed to perform on the 8th season of NBC’s “Last Comic Standing” in Los Angeles.