Bloody Bash on the Hill 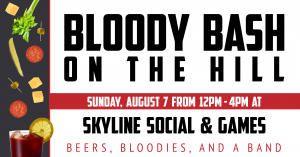 Beers, bloodies, and a band! The first-annual Bloody Mary Bash on the hill will be on the decks at Skyline Social & Games on Sunday, August 7, 2022.
BLOODY MARY CONTEST
From 12-4pm, local bars & restaurants will compete on the hill to win the Bloody Mary contests. Winners will be determined by attendees, who will cast their votes for the Best Tasting Bloody Mary AND the Best Presented Bloody Mary. All proceeds from the event & bar sales will be donated to Never Surrender Inc. to help fund the fight against ALS (Lou Gehrig’s disease).
Competing Bars & Restaurants:

Blacklist Brewing Company
BAND
What's a bash without a band?! The Northwood's Band will be taking to the stage from 1-4pm during the event.
About the Band: The Northwood’s Band mainly covers classic rock and country but are known for our wide variety of music from the 1950s to current. The Northwood’s band was voted the Best Local Band by Duluth News Tribune (2018-2021) and Duluth Reader (2017-2019).
TICKETS
Tickets are on sale through Saturday, August 6. $15 in advance. $20 at the door on Sunday. The ticket includes a Bloody Mary sample from each bar & restaurant, beer snit samples from each brewery, and live music. All proceeds from the event & bar sales will be donated to Never Surrender Inc. to help fund the fight against ALS (Lou Gehrig’s disease). Buy your tickets now & save $5! https://bit.ly/3In41cO
Telephone
2183417584
Email
This email address is being protected from spambots. You need JavaScript enabled to view it.
Website
https://skylinesocialandgames.com/
Previous YearPrevious MonthNext YearNext Month
August 2022