Rockin' the Docks with Shenandoah 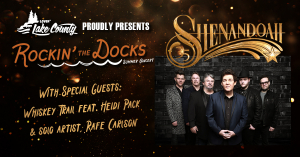 *Shenandoah 35th Anniversary Tour*
When country music lovers talk about the greatest groups in the genre, Shenandoah is always at the forefront of any discussion.
Fueled by Marty Raybon’s distinctive vocals and the band’s skilled musicianship, Shenandoah became well known for delivering such hits as “Two Dozen Roses”, “Church on Cumberland Road” and “Next to You, Next to Me” and achingly beautiful classics, such as “I Want to Be Loved Like That” and the Grammy-winning “Somewhere in the Vicinity of the Heart” duet with Alison Krauss.
The boys from Muscle Shoals have left a potent legacy in country music with more than 300 million streams, over 8 million combined album sales, and 13 No. 1 radio singles over the course of more than three decades.
Today that legacy continues as Shenandoah embarks on its 35th Anniversary Tour.
Opening Acts:
*Whiskey Trail featuring Heidi Pack*
Hailing from the Midwest, singer-songwriter Heidi Pack’s talent and incredible control of pitch and timbre will give you goosebumps every performance. With influences spanning a variety of genres and artists including Taylor Swift, Jewel, Dolly Parton, Kacey Musgraves, Julia Michaels, and even Johnny Cash. Heidi can seamlessly cross-blend folk, pop, and country into her one-of-a-kind voice. Heidi’s captivating, soulful, sultry, bluesy, and resonant voice paired with her catchy, witty, and memorable lyrics tell stories of small-town Americana and will take you to the heart of country music itself.
Based in Duluth, Minnesota, Whiskey Trail, led by charismatic frontwoman, Heidi Pack, combines her spectacular voice paired with a driven attitude, along with passion and wit in her storytelling backed up by an incredible group of musicians that bring each song to life!
The band is made up of instrumentalists Josh Maynard, Jim Holbeck, Garrett Ness, Ryan Holte, and Jason Owen Soderland. Production ran by Vernon Williams. Booking and social media management Elizabeth Magliochette.
*Rafe Carlson*
Rafe grew up in northern Minnesota in a family full of talented musicians and started making a name for himself as a performing artist in the Duluth/Twin Ports area after he left his job of 3 years selling RVs. As he began to play in front of bigger and bigger crowds and playing at venues across the country, he turned his attention to songwriting. He met his producer in Nashville, Tennessee in May of 2021, and has since made dozens of trips down, writing with world-class Nashville songwriters, playing shows in the downtown area, and spending time in the studio recording his highly anticipated debut album.
Previous YearPrevious MonthNext YearNext Month
August 2022