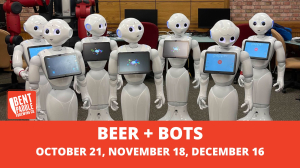 Bent Paddle Brewing is collecting intel for a project to provide humor to elders in care through automated robotic healthcare aids, and jokes are needed. Beer + Bots events are a chance to share jokes the robots for potential inclusion in their comedic repertoire. The events are held on the third Friday of the month through the end of the year.

The robots were created by Dr. Arshia Khan, professor of computer science at the University of Minnesota Duluth’s Swenson College of Science and Engineering. Her programmed robots connect with nursing home residents through an array of sensors, human-like gestures and conversation — including jokes. But the feedback is that computer programmers aren’t the best comedians.

Dr. Khan’s work has made international news for her groundbreaking research, which has been featured by CBS News, New York Times, NPR and Science Times, to name a few.

While her robots are already connecting with nursing home residents across Minnesota, this is one of the rare opportunities to interact with these robots in public.
Be part of society’s transformation and peek under the hood of the computer to see how robots are programmed by joining Beer + Bots.